Many times in my life I have come upon an archeological artifact, plant, animal, or an insect that at first glance has a questionable identification, origin or meaning. My mind is at once awed by the mystery, and at the same time, works through my past experiences, to try and place meaning on what is in front of me. It is a guessing game, where narrative or meaning is created. There is a line that is walked between what a viewer sees, what they think they see, and what they actually see. I am interested in what the viewer thinks they see, the perceiving, and the interpretation of the perceived based on a personal mythology created by one’s past experiences.

My work method stems from an interest in the complex structure of bamboo and its unlimited potential as an art material. Bamboo is a remarkably versatile material. It can be cut, layered, glued, and sanded like wood, or it can be split, bent, and woven, incorporating basketry techniques. Bamboo’s repetition of nodes, its hollow structure, and its flexibility create a challenge and versatility I enjoy working with. Bamboo, a continually renewable resource, grows in a way that makes it easy to gather without worry about harming the plant.

Bamboo requires a complex preparation process in order to be used as an art material. I gather my bamboo from backyards, gardens, and farms around Oregon, making friends with other bamboo enthusiast in the process. After gathering, the bamboo is dried for at least six months to remove moisture, then prepared with heat, which removes an oily starch, making the bamboo unattractive to insects and hardening it. After preparing the bamboo, the possibilities are limitless.

When I work I develop a system for creating a structure. Some systems, like stacking split bamboo pieces into progressively smaller rows, I have been using for years. I consider each of these systems to be like a sentence in a paragraph that tells a story-a part of my visual vocabulary. 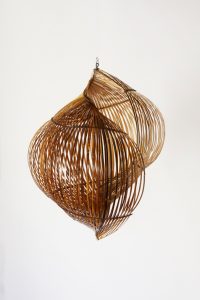 While growing up in New Mexico I became aware of and inspired by the adobe brick architecture, the multitude of patterns in the local basketry and pottery, the sparse and delicate landscape, and the many myths I have read over the years.

The impetus for my work comes partly from a collection of the forms, textures, materials, and methods of other cultures, past and present. It also comes from an interest in forms in nature, the microcosmic and the macrocosmic, and patterns contained within the plant and animal world.

The continuous evolution a plant makes inspires me to further explore how to manipulate my own forms. These elements are combined with ideas I have gathered in making and evaluating my past work. In the abstract objects I create, I incorporate a continuous narrative of my own internal culture, one that includes all that I am exposed to. Referencing aspects of objects from the past and forms from nature through knots, interwoven lines, and stacking systems, I am creating a story in hopes of calling to mind the story in us all.

Charissa Brock is a fiber artist working with bamboo, a giant grass that has been used for centuries to create baskets and other everyday objects. She integrates wood, glass, paper and thread as visual accents and structural components. Her abstract sculptures are crafted using basketry, woodworking, and fiber art techniques. Brock’s early art education began under the tutelage of her mother, Emily Brock, a nationally recognized glass artist. Later, she earned a BFA in Glass from Center For Creative Studies, College of Art and Design. After college, Charissa studied basketry with individual teachers before earning an MFA in Fibers at Tyler School of Art/Temple University in 2000.

She has used bamboo as a primary material since first discovering it while at Tyler. In addition to her studio practice, she teaches workshops across the USA. A Japanese TV show hosted her in Japan spring, 2017 during which they filmed her interacting with the members of the bamboo community for an episode of “Who wants to Come to Japan?” It was an exceptional opportunity wherein she met and learned from people with a long tradition of working with he material she loves. Her artwork is in private collections worldwide as well as Arizona State University Museum, the Rivermark Hotel, and the Hyatt Regency Maui, and the Ritz-Carlton. Her work was featured in an article in the Dec/Jan 2019 issue of American Craft Magazine.