A studio visit with Morgami Jin and his wife, part 2. 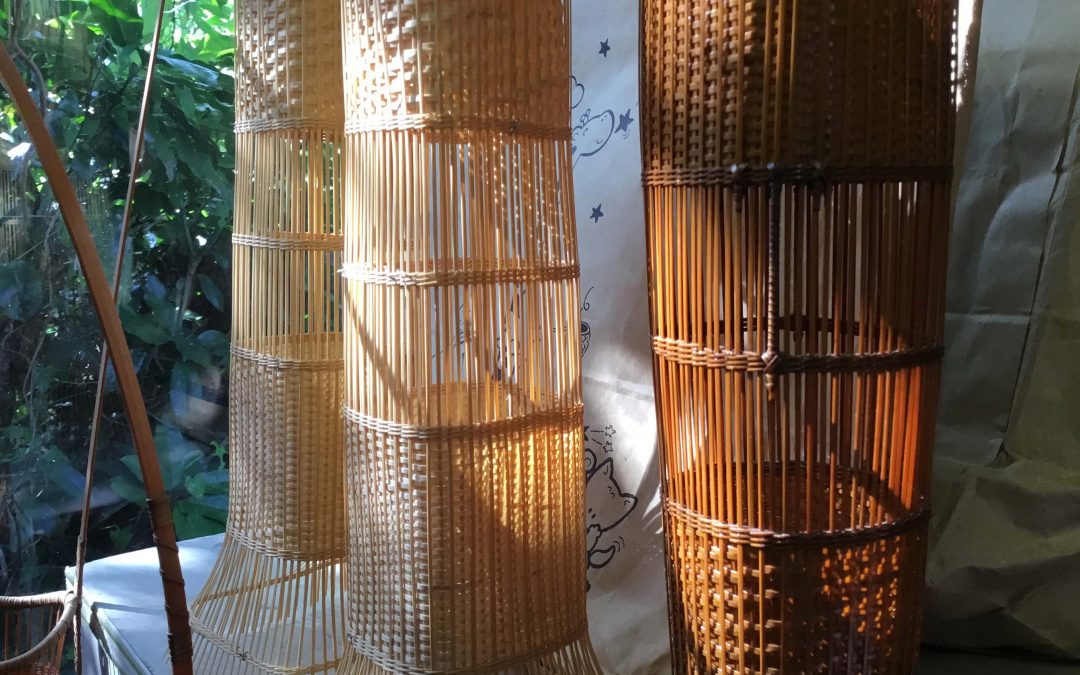 After spending a morning in a bamboo factory with Morgami Jin, I had the good fortune of receiving a private bamboo splitting lesson from he and his wife. Morgami-san is well known for how finely he can split bamboo and his wife Ayako-san, who works with him, was an excellent coach.

Morgami Jin and his wife Ayako-san have been together for about 15 or 16 years. They have three wonderful children. I was thrilled to meet Morgami-san and double thrilled to meet Ayako-san. She and I have both been working with bamboo the same amount of time and both are working mothers. She studied at the Bamboo Vocational School in Beppu and then came to work for Morgami-san. His father is a traditional bamboo craftsman as well.

Morgami-san’s studio is down to earth, functional, and tools are stored to be at hand when needed. It has the feeling and look of a creative space that is used every day, a well oiled machine. Beautiful baskets graced a window and there was even one of his finely woven baskets being used to store tools.

You may notice there are no tables or furniture. All work is done sitting on the floor on cushions. It came naturally for my two teachers, but I was constantly trying to find the right way to sit. Even yoga hadn’t prepared me for this.

The knife we used was different from the bamboo splitting knife I have been using for the last 16 years. Jiro Yonezawa first showed me how to split bamboo in 2001. Until then I had been using a hammer and chisel to pry the bamboo apart. It was a big step up to use a splitting knife.

The difference between my splitting knife and the type of knife Morgami-san and his wife they taught me with is the addition of something called a dowappa (phonetic spelling).

Here is an image of my trusty old bamboo knife next to a lovely splitting knife presented to me by Tanabe Chikuunsai iv. The story of our times together is coming up so please come back to visit!

Top:The new knife I learned how to use. Bottom:My trusty old splitting knife.

After the bamboo has begun to be split with the sharp edge of the blade the bamboo is moved over to the dowappa, which can help control the thickness of the strip depending on which way it is tilted. The other thing which helps to control the thickness and acts as a safety feature is how the bamboo is pinched together by the hand not holding the blade. The differences between what I have been doing for the past 17 years and what I was learning were slight, but a slight difference in how a tool is used can make all the difference in the world. I am not going to go to far into the finer details of bamboo splitting here, learning this skill is something one needs to see. If you want to learn about how to split bamboo taking a class would be best, one on one or with a group. If traveling for a class is not an option Jiro Yonezawa has a really wonderful video you can watch here.

During our splitting class Morgami-san and Ayako-san switched the type of bamboo we were working with. It was the same species of bamboo, and the same diameter of bamboo. The difference was the density. They checked the density of the bamboo by tapping on it. A soft, less dense, younger bamboo makes a dull sound. An older, harder, and more dense bamboo will make a sharper sound. They were interested in using the harder bamboo because it is easier to get hurt splitting softer bamboo.

Dinner with the family. Notice the bamboo table dinner was served on, woven by Morgami Jin’s wife Ayako.

In the evening I was invited to dinner at the Morgami family house. Morgami-san, his wife Ayako, and two of their children Sayaka and Madoka were there. Morgami Jin’s student Osami Yokoyama, his wife, and their child were also present. The dinner was all local specialties, it was quite a spread of beautiful and tasty food. My favorite was sliced tomatoes with tiny fish on top. Dinner was served on Ayako-san’s graduate project for the Bamboo Vocational School, a finely woven bamboo table. Chopsticks his father made were used to serve the food.

After dinner, and with some prying, Osami Yokoyama showed me his work online. It is stunning. There is a hint of some of the techniques I see in pieces by artists like Shono Tokuzo, although the pieces break out of symmetry and the elements elegantly and playfully dance around each other. His pieces are quite large, when I asked how big they were he gestured about waist high. He is having his first show at Yufuku Gallery in Tokyo.

In the next blog I will share a second day in Morgami Jin’s studio, where we will walk through the making of a small bamboo basket!