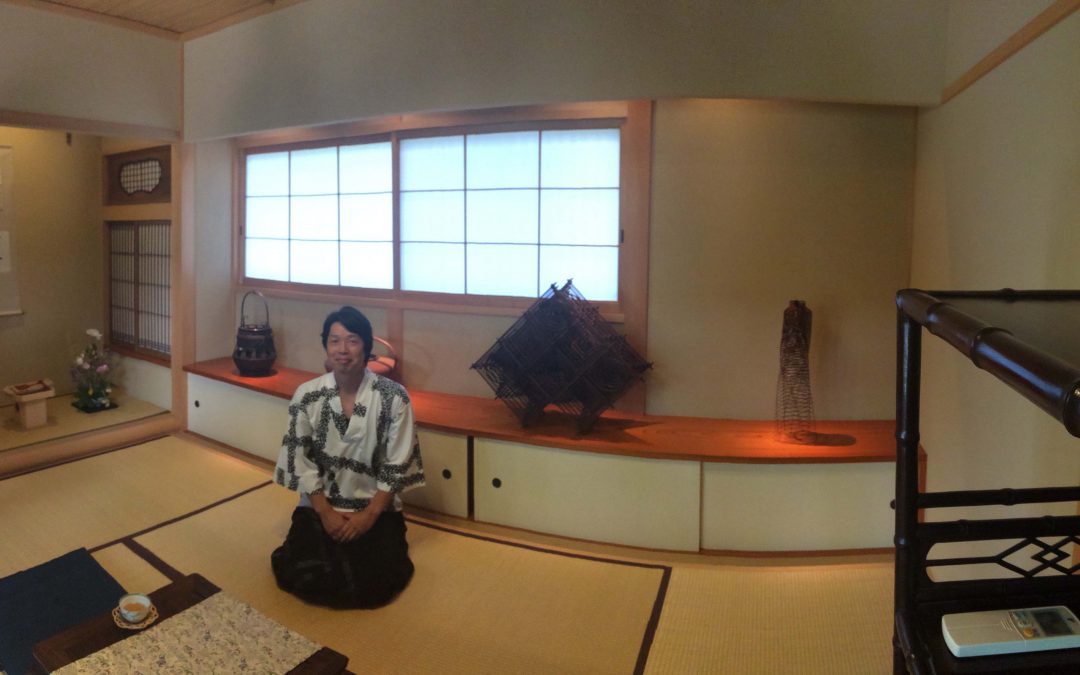 This morning found me riding in a taxi with crocheted seat covers, which appealed to the fiber artist in me. After the white gloved driver dropped us off, I found myself at the door of a stately house in Osaka. There was a great variegated bamboo at the front, so I knew we were going to meet a bamboo person. I was surprised, when the door opened, to find Tanabe Chikuunsai IV.

Tanabe Chikuunsai IV is the fourth generation of bamboo basket makers in his family. Although I grew up learning glass art from my mom, I find it amazing that there could be a family with four generations of artists practicing the same art form. Not only did Tanabe-san study bamboo arts in his families studio since a very young age, he also studied sculpture and earned a dergree in college and attended the bamboo vocational school in Beppu, Japan. The bamboo techniques and ideas passed down through the family, as well as the knowledge gathered from the schools Tanabe-san attended, has created an amazing visual vocabulary Tanabe-san can work from. I had the good fortune of meeting Tanabe-san in Florida during the show “Modern Twist: Contemporary Japanese Bamboo Art” at the Ruth Funk Center for Textile Arts, where we both gave a presentation and he had several works. I was aware of the fact that he is a fourth generation bamboo basket maker and really wanted to see his families collection of artworks, and hear his families artist story. There was also some technical information I was hoping to learn.

Tanabe-san’s most recent project is an instillation at the MET, as part of the show “Japanese Bamboo Art:The Abby Collection”. If you want to get a sense of what the show is about Roberta Smith wrote a wonderful article about the show in the New York Times.

Tanabe-san’s beautiful intimate and traditional Osaka garden is surrounded by his house, studio, and tearoom. I was first lead into his families tea room and gallery, where four generations of his family have baskets on display. We were served tea, the ceramic tea bowls sitting on little woven bamboo trays that Tanabe-san’s studio produces. Tanabe-san first shared with me his great grandfathers basket, which was made in a style similar to Chinese tea ceremony baskets. This type of basket uses a lot of decorative knotting and the form holds true to a traditional basket shape. His grandfather’s basket breaks away from tradition, yet still uses the basket form and traditional weaving patterns. His father’s work is purely sculptural, using bamboo and rattan to create a grid like form incorporating circles.

Other objects his family made that I was shown included a bamboo cicada and a tobacco pouch.

The very ornate 150 year old cicada, was woven out of bamboo using several different patterns and meant to be hung on the wall as a flower basket. This is an example of the style of basket, although not the one produced by his family.

The piece that took my breath away was a Tobacco basket, around 4” x 3 “x 1”, meant to be worn on a man’s belt, woven by his great grandfather.

It incorporates split pieces of antique bamboo arrows once used by a Samurai. It was a truly mystical experience to be holding such a beautifully made object incorporating bamboo once used by samurai. Tanabe-san has continued the tradition of collecting arrows to incorporate into his own work. He carries his grandfathers tobacco pouch to openings to hold business cards.

Close up of Tobacco pouch shows the variation of decorative color bamboo arrows had.

The above tobacco pouch, made by the Chikuunsai family, is similar to Tanabe-san’s Great grandfather’s pouch I saw. It also includes Samurai arrow pieces.

The alter in the tea house contained a sword that was past down through the family for generations, given to each artist when they took on the family artist name of Chikuunsai. Tanabe-san took on the name in March 2018. Offical paperwork certifying the new name also graces the alter.

Lastly, Tanabe-san showed me a piece from his new series of work, which is astounding. He is collaborating with a mathematician in order to create complex sculptural forms, in which every element is slightly smaller than the next element, the elements go from thin to thick, and the spacing of the elements go from wide to narrow progressively.

This work in incredibly challenging. It is strenuous and laborious enough making properly prepared bamboo strips of all the same size. The lengthy process of making bamboo strips calls for several tools accurately set to the right size. Making many elements of different sizes requires accurate equations and the resetting of tools over and over again.

The result is a seamless and intriguing form that has a harmony, peace, and flow. It creates the illusion of simplicity, when the form is really quite complex. More of Tanabe-san’s newer works in this series can be seen here.

The next blog post will be about Tanabe-san’s studio, which was really wonderful!