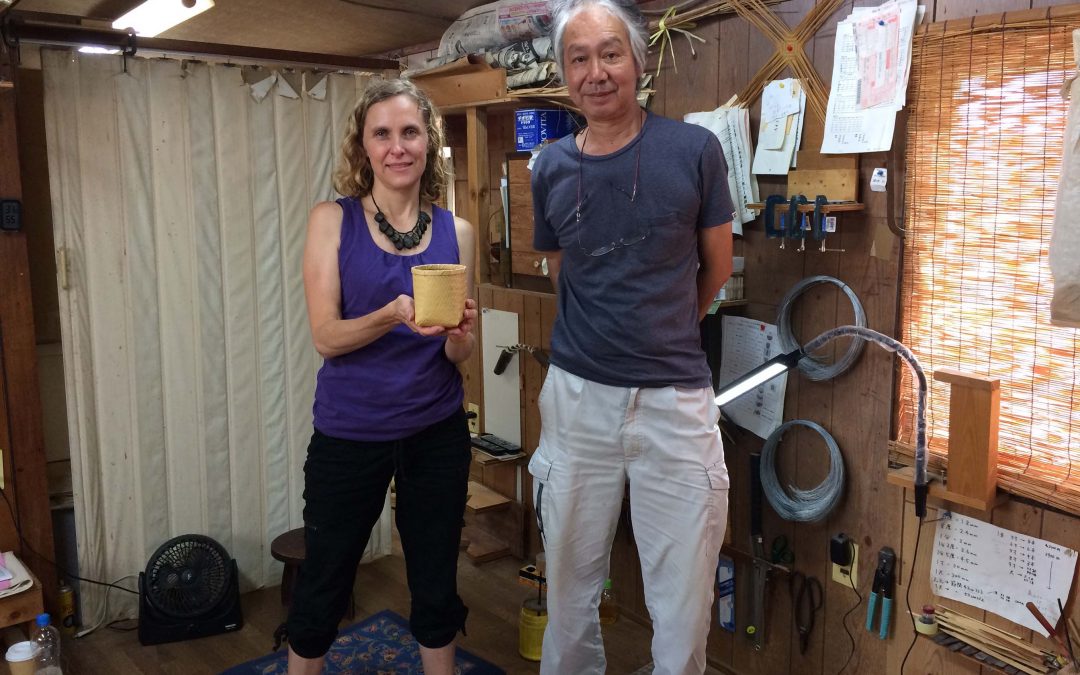 I felt very grateful to be able to spend a day with Morgami Jin and his family, visiting a bamboo factory, splitting bamboo, and having dinner. It was such a great surprise to find I also was going to get to spend a day with him weaving a basket. His work had already shown me that he is a patient artist; he was also an incredibly patient teacher.

The first step was to create the bottom of the basket. The type of weave we worked on creates a zigzag like pattern, alternating between over three, over two, and over one.

After Morgami-san had woven several rows and the pattern was about to repeat itself he let me weave, directing me when to go over and under. The weave felt very complicated, and it wasn’t until we were almost done with the bottom that I felt like I was catching on. If I had to repeat the weaving on my own it would require detailed directions. This is actually one of the less complex weaves so it gave me even more of an appreciation for woven baskets with a more complex pattern.

The bamboo strips must stay wet so they stick together, The dryer they are the harder it is to keep the weave tight and the material starts to slip around.

When the square bottom was woven short bamboo splits were added to keep the weave from slipping while the corners were woven. The middle of each side becomes the corners of the basket. The weaving pattern becomes over three under three, and after a few rows up the side switches to over two under two. While Morgami Jin was weaving the sides his fingers flew, it was second nature to him and seemed like it needed no thought. Morgami-san let me weave several inches of the side of the basket and I started to feel the same flow, although I can tell it would take many baskets before this type of weave would become second nature to me.

I was most interested to see how a rim of a basket was made. I could see how knowing how to create a rim could translate over into my own work.

A bamboo strip is first coaxed into a curve gently by hand, and then wrapped around the basket, the ends overlapping. A pencil is used to mark a point where the two ends overlap.

The extra material is cut from the strip at least 3 cm from the mark. The overlap of material on our basket was 3 inches.

Each end is then beveled down from the mark to the end of the strip using a baishinshi knife.

A glue is then added to the beveled area of the strip. When asked what type of glue was being used Morgami Jin said “Bondo”. It is a type of Japanese superglue. What would be comparable in the US is something that warrants research. Wire is temporarily wrapped around the bamboo strip to hold it while the glue dries.

Morgami-san mentioned that if he were making several baskets he would continue making this type of element, wait for the strips to dry, and return the next day to use them. Because we were on a timeline we moved onto the next step, even though it would be a bit more challenging with the glue not completely dry.

Morgami-san then uses a pair of shears to cut the excess material off the edge of the basket. The type of shears used are also used in Bonsai tree trimming.

Another strip of bamboo is coaxed by hand to curve so the skin of the bamboo is on the inside of the curve. This skin is the strongest and most ornamental part of the bamboo.

It is then put inside the basket, pencil lines are made to mark a 3 cm overlap, and the same cutting, beveling, gluing, and wiring process is used to prepare the inside ring to become the rim.

When the inside bamboo ring is in place a hand tool which functions as a drill is used to make small holes directly below the rim through which to run wire, then later rattan, to hold the rim together. The hand drilling tool has a square shaped point, which, when twirled back and forth, creates a hole between woven material. The rim is then wired together. One of Morgami-san’s tricks I really liked was using the wire cutters to both cut and tighten the wire around the rim. It certainly can save time and energy to not have to pick up and set down wire cutters and needle nose pliers, especially if doing the same technique hundreds of times.

After the rim is wired together more holes are added through which to sew the rattan that will bind the rim together.

It was truly wonderful to see a whole basket made from beginning to end, from the factory where the material was prepared to the finished piece in a studio in Beppu, Japan. Although this was a production piece, the amount of skill, work, and care for the craftsmanship that goes into such an item is still pretty astounding. A basket like this will far outlive any plastic item made in both beauty, ecological soundness, and utility.

I was sorry to have to depart from Morgami-Jin and his family but the memory of the experience will be treasured.

Morgami-san and I with the woven basket.